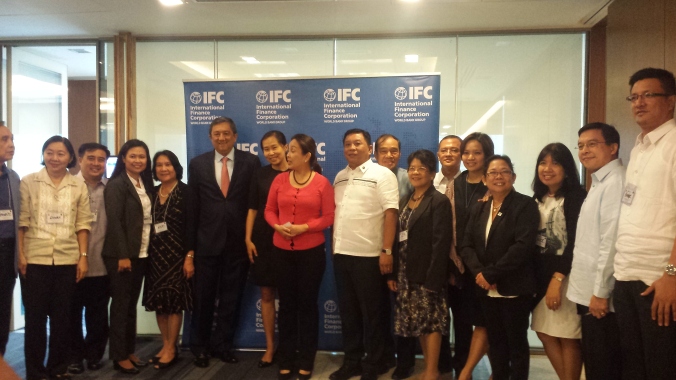 I have always been vocal in my belief that everyone should have equal and unfettered access to God’s gift to us – our environment. On the other hand, we all have the responsibility to take care of our environment and more importantly, to know how to tap the richness of this gift to us. We have to learn; we have to be educated about these things.

That is why I was glad, we at the College of Economics and Management Alumni Foundation Inc. (CEMAFI), was able to host with the International Finance Corporation (IFC) of the World Bank a forum with the theme “Making Renewable Energy a Vehicle for Sustained Inclusive Growth. It was a daylong event attended by energy players, members of the academe and bankers, and moderated by former Energy Undersecretary Jay Layug.

That is why I was glad, we at the College of Economics and Management Alumni Foundation Inc. (CEMAFI), was able to host with the International Finance Corporation (IFC) of the World Bank a forum with the theme “Making Renewable Energy a Vehicle for Sustained Inclusive Growth. It was a daylong event attended by energy players, members of the academe and bankers, and moderated by former Energy Undersecretary Jay Layug.

The event was held at the IFC’s office in BGC last February 26, 2016.
Tapping our environment and produce renewable energy is one of the key drivers of economic growth. This is a concrete way of exercising this belief in our inherent right to use responsibly our environment.And I am not alone in saying this. In fact, a recent report by the International Renewable Agency (IRENA) said that increasing the energy mix to include more renewable energy could mean a global economic boost of as much as 1.1 percent by 2030.

But again, more needs to be done when it comes to developing renewable energy in the country, including relaxing foreign ownership restriction, shifting to a more appropriate tariff mechanism scheme that calculates for the risks of the developers adequately, and a review of the recently implemented CSP, to name a few.

And it is for this reason that I am helping my alma matter, UP Los Baños through our alumni association, UPLB CEMAFI–of which, I am the president–become more proactive in developing renewable energy through various initiatives.
One of the speakers was Senator Loren Legarda, a staunch advocate of green energy in the Senate. During the open forum, Sen. Legarda heard the travails and challenges of developers. She was particularly surprised that the 12% import VAT was obviously very unpopular among the developers.

On the other hand, UPLB Chancellor Dr. Fernando Sanchez Jr., in his opening remarks, assured everyone of UPLB’s commitment to renewable energy development. His exact words were that the university’s “research and development agenda is focused on accelerating infrastructure development by optimizing resources in investment in the renewable energy sector.”

And I fully support UPLB’s drive to contribute more to the renewable energy sector. Not only because I love my Alma mater, but also because it is my belief that it is time to bridge the divide between the academe and the problems facing the sector in the real world. What do I mean by this?

For one, no single institution is credible and can provide an independent opinion on RE resources. Renewable energy developers rely heavily on foreign consultants, which has cost implications. The lack of information and competence locally serves as an entry barrier for small RE players.

And this is where the academe can help. In the right intellectual way, the academe can lead the way in lowering that entry barrier, something that the UPLB can offer as a service to the sector. The university too can benefit if it beefs up its competence in generating RE data since the school can charge fees for this information.

We at CEMAFI has taken the responsibility of finding more funds for research to attract more professors to do extensive research. In fact, we have already established the UPLB’s Rural Economic Development and Renewable Energy Center years back. Generating data and selling them for a fee will make the center more self-sufficient when it comes to funding while helping the local RE players.

And this is why, together with our alumni association, we are working together closely to help UPLB meet its objective of “making renewable energy a vehicle for sustained, inclusive growth,” the exact words of Dr. Sanchez during the forum. The recently held forum is just the start of the many initiatives since we recognize that more is needed to develop the sector. We will have more conferences in the coming weeks, as well as other initiatives to help address the obstacles to achieving the sector’s full potential.

Given UPLB’s competencies, I have no doubt that the university can play a pivotal role in addressing the issues hounding the renewable energy sector. And I personally pledge to help the university achieve its goal, and I’m sure fellow alumni will do the same. After all, again, in the words of Dr. Sanchez during his welcome remarks “When like-minded people get together, they get the job done.”

2 thoughts on “Bridging the Gap between the Academe and RE Sector: The UPLB and IFC RE Forum”