Agriculture is the single sector that employs the most number of individuals. According to the United Nations, 40% of the world’s population rely on agriculture for their livelihood. Unfortunately, the world’s poorest are from the sector.

The United Nations Environment Programme (UNEP) says that increasing the productivity of the sector is one of the most effective means to combat poverty. The UNEP noted that a 10 percent growth in farm production reduces poverty by five percent is Asia and seven percent in Africa. And one of the measures to improve production is to ensure proper irrigation. This was the focus of the International Renewable Energy Agency (IRENA) in its report “Solar pumping for irrigation: Improving livelihoods and sustainability, stressing the benefits of solar pumps for irrigation.”

The report noted that food is produced mostly on rainfed lands and the majority of farmed land in South Asia and Sub-Saharan Africa are reliant on seasonal rains to meet water needs since only 20% are irrigated agriculture. Agrarian economies developed irrigation particularly groundwater structures (wells and tube wells) to boost agricultural productivity. Unfortunately, this has increased water consumption and electricity consumption. In India, for example, irrigation comprises 18% of electricity consumption and five percent of diesel consumption. And globally, energy use of electric irrigation pumps is roughly 62 terawatt-hours per annum, which is equal to Singapore’s annual power consumption in 2014.

The report stressed that there are consequences on depending heavily on electric power pumps. There is the impact on public spending given that electricity or fuels for irrigation are often subsidized by governments, which also results in the inability of utilities and distribution firms to recover their full costs. This hampers the utility companies to fund new power projects. On the other hand, utility businesses that are unconcerned on cost recovery have little incentives to address the inefficiency of water and energy consumption practices in the sector. Plus, there is also the impact on the environment. Naturally, high energy consumption for pumping contributes to greenhouse gas emissions. For example, in India, fuel groundwater pumping accounts for eight to 12 percent of the country’s greenhouse emission. Likewise, in China, energy consumption for irrigation equals roughly 45 metric tons of C02 or equivalent 50 to 70 percent of all the energy activities of its agricultural sector.

Given the above consequences of relying heavily on energy for pumping, it would then be beneficial to harness the sun’s power for irrigation purposes.  The report emphasized that solar power can provide cost-effective, reliable and environmentally-friendly irrigation services. Harnessing the sun’s power to irrigate farmland can substantially help increase farmer’s productivity and incomes, as well as help government’s reduce public expenditure on fossil fuel subsidies. The report highlighted examples to prove that such outcomes are possible. 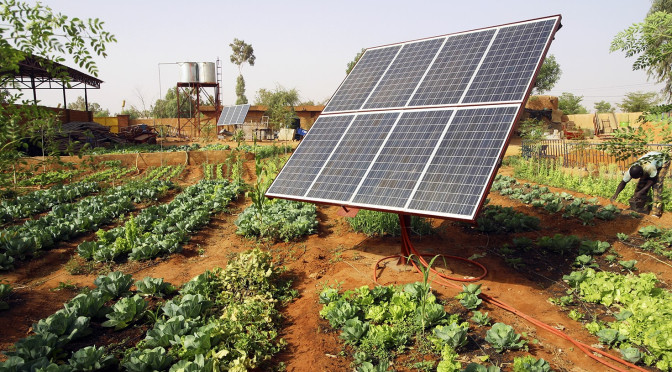 In Little Rann of Kutch in Gujarat, India where 70 percent of India’s salt are produced, most of the salt farmers use inefficient diesel-powered water pumps in the salt harvesting. Farmers’ income are reduced given that they spend 40 percent of their annual revenues to buy diesel for their next harvest season.  Two pilot projects were carried out in the area to replace diesel-powered pumps with solar-powered pumps. The projects showed that annual savings of farmers increased by $1,277 or 161% compared to farmers who were using diesel-powered ones.

Likewise, in Zimbabwe, the Ruti Dam Irrigation Scheme of Oxfam, added solar pumps to irrigate more lands and solar rooftop panels to provide cold storage and solar charging. Such actions resulted in an increase of household incomes by 287% for the very poor and a 47 percent income increase even for middle-income families.

Solar irrigation pumping could pave the way for lessening CO2 emissions, too. In the case of Little Rann, estimates showed that reduction of 115,000 tons of CO2 is possible when diesel water pumps are replaced with solar or hybrid solar or diesel pumps in the area. Similarly, research by the World Wild Fund showed that the deployment of 5 million solar pumps could save 10 billion liters of diesel or 23 billion kWh of power. Also, in Bangladesh, studies showed a reduction of one million tons of emissions yearly or 450 million liters of diesel with the installation of 50,000 solar irrigation pumps.

I, for one, is a believer of solar pumps. In fact, almost a decade ago, we implemented a solar pumping project in Butong, Ronda, Cebu. We installed the Aquameter system that employs a controller that can covert 2,700 watts of photovoltaic power and solar-powered tap stands where consumers simply need to draw water using their rechargeable pre-paid cards.  Water is sourced from an underground river where a well was drilled. Unfortunately, the project didn’t last long as the community became less cooperative with the project.

So, it is good news that the DA is now considering solar pumps again. Last August, Agriculture Secretary Emmanuel Piñol announced that the department is installing five prototypes of solar powered irrigation pumps in different areas. The prototypes are US-assembled where the design allows drawing of water from underground or catchment basins. The government expects that installation of such can provide potable water supply, generate excess power for isolated areas as well as provide other sources of livelihood.

It is my hope that this project becomes successful especially since our farmers, just like in other parts of the world, remain the poorest. Surely, we can help our countrymen get out of poverty if we put to good use technology along with our natural resources. Giving solar-powered pumps a chance is a step in the right direction.

One thought on “Harnessing the Sun to Empower Farmers”