Previously, I have argued that the country will benefit from harnessing renewable energy given the fluctuating prices of coal and oil that result in energy price spikes.

I have also introduced the concept of portfolio theory, which says that risks can be minimized regardless of the level of expected return as long as investors mix low or zero-risk assets in their portfolio. In energy planning, this means adding more renewable energy in the energy mixes that are predominantly composed of fossil-based power plants. Again, fossil-based energy is considered a risky asset since the supply is fast diminishing, pushing both fossil fuel and energy prices upwards eventually.

The Benefits of Wind and Solar Energy

Among all renewable energy technologies, the wind is considered as one of the cleanest energy sources. Wind power generation does not release any gas or emission.

And just like with other renewable energy technologies, the establishment of a wind power plant can provide employment to local communities as wind turbines installation and the maintenance of wind power plants require manpower.

On the other hand, the sun is the greatest source of energy as the solar energy that is emitted to the earth in a year is twice the amount of the produced fossil and nuclear energy around the world. In fact, the earth receives roughly 340 watts of solar energy for every square meter.  And one second of sunlight is equivalent to 100-watt bulb use. Plus, solar energy plants require little maintenance after installation. A small herd of goats, in fact, will be beneficial.

However, there is this misconception that adding wind and solar energy to the portfolio or energy mix will increase the cost of power generation. This is brought about by the fact that the stand-alone cost of building wind and solar power plants is higher compared to the cost of building of fossil fuel or coal-based plants. Again, I have argued before, that this is the pitfall of energy planners given that they use the least-cost method in energy planning, favoring the cheaper energy source based on current prices. Those who choose the least-cost in power generation, however, do not look at the risks: the diminishing supply of coal and oil that will make such sources of power more expensive in the future.

That said, let us take a look at a study that discussed the cost implications of adding wind and solar into the generation mix to dispel notions that adding renewable energy in the mix increases power costs.

The National Renewable Energy Laboratory conducted a study on the effects of adding both wind and solar into the generation mix for the Rocky Mountain Power Pool (RMPP) region in the United States. The RMPP region covers the entire state of Colorado and some parts of South Dakota and Wyoming. The region was chosen because of its abundance of both wind and solar energy, and its heavy reliance on natural gas and coal thermal power plants.

The study’s main objective is to determine the effect of higher penetration or use of both technologies as a hedge against the uncertainty of power costs in the region. The researchers simulated different RE penetration rates ranging from10 to 50 percent under different price scenarios of natural gas to determine whether adding more wind and solar energy into the energy mix increases energy costs.

The study showed that in a coal-dominated mix, the annualized variable system cost of adding 10 percent RE at a low natural gas price of $2/MMBtuis roughly $15/mWh. And the annualized variable system cost of electricity for the region goes down to $8/mWhwhen RE penetration is increased to 15 percent at a higher natural gas price ranging from $4/MMBtu and $9/MMBtu.

This simply means that adding more renewable energy, in this case, wind and solar can reduce the variable system cost of electricity even when natural gas prices shoot up.

Of course, the study did not tackle total system costs as capital recovery and fixed operations and maintenance costs– all affecting total system costs–vary. The research also showed diminishing marginal returns for the higher penetration rate of 35 to 40 percent of RE. But clearly, the study debunks the misconception that adding more renewable energy pushes energy prices up.

Sadly, as of 2014, wind and solar energy only contribute 0.2% and 0.02%, respectively to the total energy mix in the Philippines despite the country’s great potential to harness energy from these two renewable energy sources. According to NREL, the Philippines has a total of 76.6 GW of potential wind capacity.

As of last year, the country has a generation mix composed of 42.78% coal, 24.19% natural gas and 7.39% oil-based. It will then be beneficial for the Philippines to add more renewable energy to hedge against future power price escalations brought by the country’s dependence on coal and natural gas power plants. 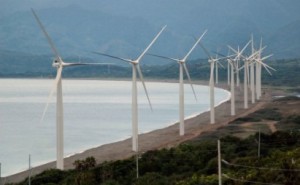 Connecting Solar and Wind Power to the Grid is a Problem

Both wind and solar energy have their benefits. However, the intermittency of solar and wind power makes the job of the system operator (SO), in our case, the National Grid Corporation of the Philippines (NGCP) more difficult.

The role of NGCP as the SO is to balance the demand and supply of energy through the use of a system. The NGCP has to find the correct mix of high-voltage generating power plants and transmit the generated electricity to the distribution utilities, which in turn distribute to end-users.

With a constant power supply from conventional sources, SO merely watches the level of frequency, voltage, and the demand, and adjust the level of supply accordingly to ensure the system’s security and stability.

The process of balancing the supply and demand becomes more difficult when intermittent energy like solar and wind is included in the supply side since the SO will have to look at both demand and supply to ensure the system is stable and secure. It’s like watching a tennis match instead of a pelota game: there are two sides to scrutinize carefully instead of just watching one side.

Obviously, there are technologies available that allow any SO to balance the demand and supply properly when intermittent sources of power are added to the mix. Plus, NGCP is technically competent to ensure system security and stability even when renewable energy is added to the system.

But here lies the problem: the increase in complexity is not properly compensated by the regulator, the Energy Regulatory Commission (ERC).  So, the objective of injecting more renewable energy into the system, which again, comes with more intermittency is not aligned with NGCP’s financial objectives. Why should NGCP agree to manage a more complex system without a corresponding adjustment or fee to compensate for this complexity?

Of course, one can and should argue that NGCP has the legal mandate to manage the system regardless of the level of difficulty, and that the management of a complex system is already part of the SO’s management fees. However, the fact is, the Renewable Energy (RE) law was not yet in place when NGCP took over the SO function from Transco when it was privatized. This means that the valuation of Transco by NGCP did not consider the management of a more complex system with the full implementation of the RE law.

This problem is often exacerbated by the arrogant attitude of some RE developers who feel that their connection to the grid is a God-given right. It is true that NGCP is mandated to connect power projects–especially RE projects– to the grid, however, our SO will go through a whole lot of hoops before it makes this decision.  From a purely selfish perspective, why should NGCP connect an RE project to the grid when doing so will only make its work more difficult?

The Use of Solar and Wind as a Physical Hedge against Price Variability within a Generation Portfolio by National Renewable Energy Laboratory http://www.nrel.gov/docs/fy13osti/59065.pdf